Lately I’ve been interested in how to setup application monitoring. With Docker, it should be pretty straight forward to setup tools like Prometheus and Grafana, so I set out to see how simple it would be to wire up my little typescript chat application in Docker with some application monitoring. This means I had to update my typescript server and client code to work inside a Docker container, add some docker files to build the images, and make a docker compose file to spin up the whole shebang. As an extra bonus, I decided to make a tiny “chaos” application that sends some garbage to the chat server so we have something more interesting to monitor.

Updates to the Code

Ideally changes to the code wouldn’t be necessary, but in my original implementation I did something a little hacky. I was directly using some dependencies from the linked server repo rather than relying on it as an actual npm package. In Docker land this is a no go because containers ideally have no context of other repos on the system. I could just add the server code as a volume to the client docker image, but that’s overkill. Far better to just pretend I am a good programmer and make the server an npm package that a Docker image can pull down.

In the server project, I made a new index.d.ts to defined the Message interface the clients should use as opposed to just exporting it in the models file. Here is the content of the new file:

After fixing any broken imports in the server code that was the only change I needed. The client code required a bit more effort.

The first thing we needed to do was include the typeScriptChatServer as an actual npm dependency, so I added the following to the package.json dependencies:

Now rather than using the link method I was using before, the client will pull down the server resource and can use it as a “proper” dependency. This really isn’t super proper though, because I’m still cheating and using the src/ directory for my dependencies which is not a good idea, but I’m lazy and expermenting so tough.

After including the dependency, I had to fix all my imports that were pulling from the server code (using type-script-server/src/index as the import path for the Message interface). After that, I had to actually implement the interface. The server really only cares that the object contract is met, not how the object actually gets constructed. Originally I was pulling the actual implementation from the server, but now it is a bit cleaner at the cost of some duplicated code. I used the same UserMessage implementation as the server.

Now that the code is Docker ready, we can make the Docker files for each build.

Our server is a super simple node server, so we just need to pull down an appropriate node docker image as the base, run our install, build, and start commands like we would if building locally, and blamo we are good to go:

I’m being pretty deliberate with my COPY commands here, I could save two lines and just do COPY . . and then run all my commands, but I try to keep my Docker images super lean and declarative. Doing an entire copy for a directory is asking for trouble, way too easy to share in files you don’t want to share. For little projects like this who cares, but for real world projects where you forgot to remove the production key from the config you were using to test locally, it can really suck.

The client is a little different, we are just loading some static files so all we need is a lightweight web server. I chose to use Nginx because I wanted to. Then I just need to put the static files I want to serve up in the proper directory. While working on this, though, I realized I didn’t actually have a build command in my client. I was just using the webpack-dev-server command, so I needed to add an actual build command to the scripts in my package.json:

This is the point where I always get split for some Docker images. Ideally, you would want your code to be built in the same container it will be run from. However in this case, I need both npm and nginx, and I don’t want to bloat my runtime container just so I can build in it. So for expediency I’m just making sure to build my code locally before I build my docker image. Then my Dockerfile is nice and easy:

Now nginx will server up my static files and all is well.

Now it’s time for the fun part: monitoring the application. I wanted some simple metrics for my server, so I decided to just expose the current number of connections and how many errors the server has retrieved, both of which are just stored in memory. Prometheus (our data extractor) relies on a file with metrics data when it makes a GET requet to the /metrics endpoint of your server. So, I had to update my server.ts code to not only to handle WebSocket connections, but also HTTP connections as well as adding the logic to actually count the connections and errors:

The changes here were adding simple counts when a new connection is formed and when an error constructing a UserMessage is encountered. The HTTP handling is dead simple, and will just always return the metrics data regardless of which endpoint is requested.

After defining these metrics, I needed an easy way to bump up my error count so I can see it. To do that, I made a super simple “chaos” script that just sends garbage data to the server for a bit:

Then, in order to run it, I added a “chaos” script to my package.json file:

Now we are ready to make the docker-compose file that will start the whole mamma-jamma.

In order to get the whole operation up and running, we need the following services:

This tells Docker to load in the v2.0.0 image for Prometheus, share in some config files (which I’ll get to below), and start the service on port 9090. We also use the latest grafana image, share in some config files (more below), and start that one on port 3001 to avoid a port collision with the server that runs on 3000. Now let’s setup our application images:

We are loading the v1.0.0 images of our client and server we just built. The server will have a WebSocket connection on port 3000, and an HTTP connection on port 8081 to avoid a collision with the client running on 8080. The chaos service is using the handy command override to tell the server image it should use npm run chaos rather than the npm start it usually uses so we only need one image for multiple uses.

Now that we have a docker-compose file defined, we need to make some config files for Prometheus and Grafana to function properly. First, I made a prometheus directory in the chat server repo (which we are sharing into the prometheus image as a volume) with the following prometheus.yml file:

Most of it is commented out, the important bits are down in the scrape_configs section. Here we tell prometheus which applications to scrape to collect data. We are having prometheus scrape data on itself so we define the localhost:9090 target since it will be in the same container. For the server, we get to use a handy feature of Docker networks and specify the service name rather than an actual address. So saying server:8081 tells Docker to route to the server service HTTP port and pull the metrics. Pretty sweet.

Now that prometheus is all setup, we can make a Grafana config which will set an initial password and prevent new users from signing up. To do that we create a config.monitoring file in the root of the chat server repo with the following content:

Putting it all Together

In order to add our Prometheus data source, click the Create your first datasource button and enter the data like the image below 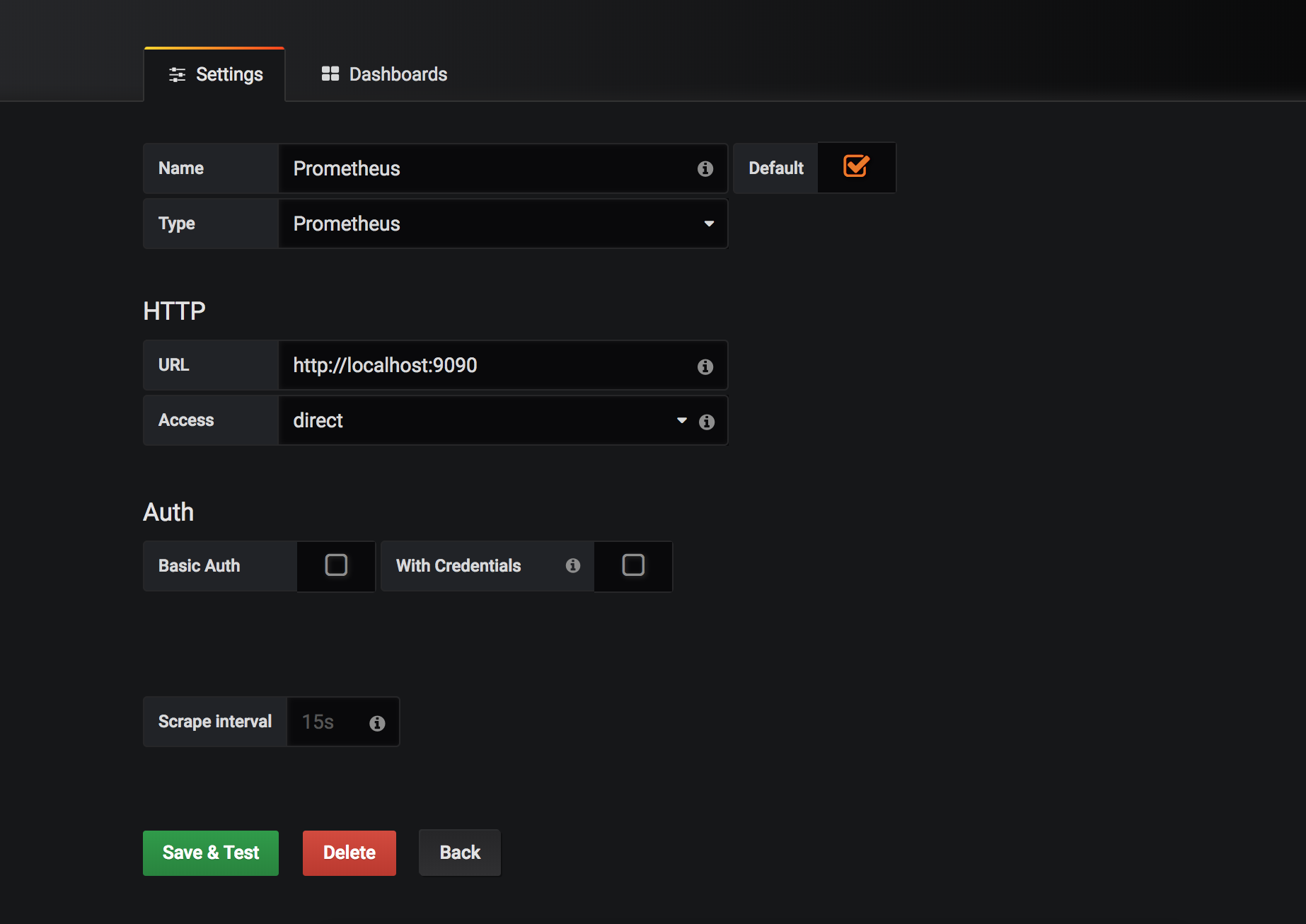 Now go back to the home screen and click Create your first dashboard. In the upper left click on the New Dadhboard text. In the next window, click the Import dashboard button. In the Or paste JSON entry area, copy and paste the contents of the server-monitoring-dashboard.json file in the chat server repo. This will create two panels, one viewing the number of connections and the other viewing the number of errors. The error dashboard has a simple alert setup to go off when the number of errors exceeds 5.

Now we have a super simple chat application with some monitoring! Playing around in Grafana is very simple, and you can add more alerts and notification methods for the available metrics, or add some more metrics to the server so you can get some better monitoring. Happy experimenting!